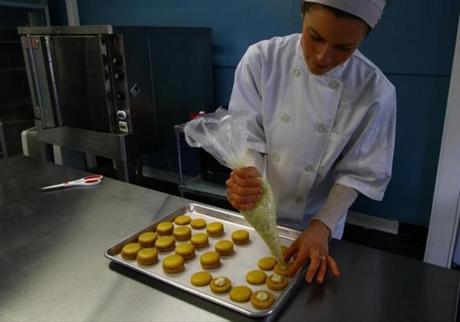 NASHUA — You can call Nina DiBona-Pauk’s specialty a macaron, like the French do, or even a macaroon, which some think is the American name (which it isn’t), or a fine French pastry. Just don’t call it a cookie.

“I hate it when people call them cookies,” says DiBona-Pauk, 29, who runs Moochie’s Macarons out of a small commercial kitchen here. DiBona-Pauk says she’s determined to “take the pretentious out of macarons,” and her website notes that she won’t correct you if you mispronounce the name. But “cookie” suggests something easy to make and consume
d by the handful, whereas macarons are extraordinarily temperamental and best eaten in tiny bites, one at a sitting.

For the record, macaron (pronounced “mah-cah-rohn,” with the n nearly silent) isn’t just a fancier way of saying macaroon. They’re two different confections. A macaron is, basically, egg whites, sugar, and almond flour, tinted colorfully, piped into tiny rounds, and sandwiched; a macaroon is egg whites, sugar, and coconut or ground almonds or almond paste; they are larger, with coarser surfaces, and never sandwiched. But the thoroughly modern macaron — the filled cookie is to an Oreo as pate de foie gras is to chopped liver — was created at the Parisian bakery Ladurée in the 1930s by the founder’s grandson, who glued two macaron shells together with a ganache filling. Ladurée remains ground zero for macarons, but the dainty pastry has experienced an explosion of popularity in the past few years, and they’re at all manner of bakeries and specialty shops in this country, even in your grocer’s freezer.

They weren’t quite so easy to find, though, in 2011, when DiBona-Pauk and her husband were planning a trip to Paris. In anticipation, DiBona-Pauk decided to cook a French menu, including notoriously finicky macarons. She’d never made them before, but she was a confident cook. “As a child,” she says, “I told my parents I wanted to be a chef. I would spend hours creating elaborate dishes that I wouldn’t let anyone eat, because I didn’t want anyone ruining my perfect lattice crust.” A psychology major at Brown, she went on to study nutrition at Simmons College and became a registered dietician. Sure, macarons were said to be tricky, but how hard could they be?

“My first batch came out really bad,” she recounts. Not yet conversant with the way of the macaron, she initially took a cavalier attitude that now strikes her as amusingly naive. “I had no almond flour, so I just substituted regular flour,” she says. That was a no-go. Just as bad was the second batch: “I had only one egg and the recipe called for two, but I figured, how much of a difference could it make?” A big difference, it turned out. Lots of bakers might have given up at that point, but DiBona-Pauk, a self-described “perfectionist,” was now more determined than ever to master the macaron.

Fifty batches later, she was pretty much there. She’d learned how long to age the egg whites (two days), how stiff to make the meringue, how carefully to fold in the almond flour and confectioners’ sugar, how to factor in weather and oven calibration. The food-science classes she’d taken as a grad student, she says, were particularly helpful. Around the time that her macarons were ready for their close-up, DiBona-Pauk was laid off from a job as a dietician. The time was right, it seemed, to launch Moochie’s (named for her Havanese pup), and in short order, she was turning out some 800 macarons a week, in intriguing flavors and a rainbow of colors. Prices range from about $2 to $2.50 per macaron, for pistachio (green), lavender-honey (lilac), strawberry (red), spicy Mayan chocolate (deep maroon). She sells them online and to coffee shops and specialty markets in New Hampshire and Massachusetts..

On a recent morning, DiBona-Pauk was topping yellow-beige shells with lemon-poppyseed buttercream, using a pastry bag to dot each cookie just so. She prefers to use a smallish amount of filling to keep the cookies delicate. “Some like a ton of filling,” she says, “but then it becomes more like a cupcake.” Except for their colors, the pastry shells are all the same; the flavor comes from the filling alone, which DiBona-Pauk makes in varieties ranging from rosewater-pistachio to maple pecan. The selection changes frequently, but she always has lavender-honey (her most popular), vanilla-bean, and chocolate ganache.

When she finally got to the mother ship, Ladurée, in Paris, DiBona-Pauk says she sampled an “amazing” salted-caramel macaron, which she hasn’t yet attempted to reproduce. She has, however, had the gratifying experience of having customers liken her macarons to Ladurée’s.

“I get compliments from people who say they’re as good,” she says. “I smile from ear to ear when I hear that.” 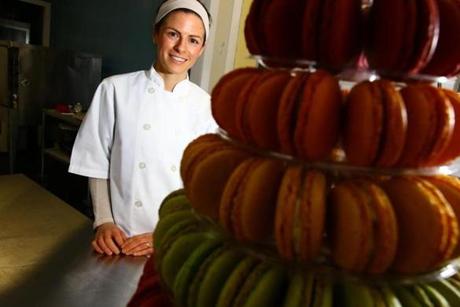 Mark Lorenz for The Boston Globe